As a civilian firearms instructor, I often encounter an absolute misconception with respect to the application of force in the defense of one’s self or others.  While statutes between states vary, many people have internalized that because the law, as stated, allows them to use deadly force in the event of, for example, a home intrusion, they are totally justified in doing so.  In most cases, these individuals have not thought out the repercussions of being involved in a shooting.    Even if the said shooting is deemed to be justified, and therefore there are no legal ramifications, there are many psychological and social effects which will unfold which will be life changing.  I will not delve into these within the scope of this article, but rather explain when use of force can be used.  I am not a lawyer, so if you carry a firearm for self defense, I recommend you consult a lawyer in your jurisdiction to get legal advice.  I am strictly speaking from a tactical defensive perspective. 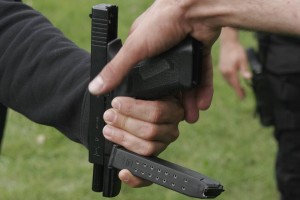 One of the biggest misconceptions is that if one feels threatened (since statutes usually use this terminology in their use of force criteria), one must engage.  This is an absolute misconception.  To illustrate this, I will explain the differences in types of engagements.  There are essentially three types – military, law enforcement, and civilian.

Under the first type of engagement (military). a threat is identified, and our objective is crystal clear – engage and neutralize the threat.  We do not have discretion as to whether the engagement is to take place or not, when given the order we have no option of retreating (unless as a result of the engagement that is the tactically sound option), and we are to use all means at our disposal in order to neutralize the threat.  Our objective here is to take the object out of the fight – either by severely injuring him (which will take additional troops out of the battle as they attend to him) or by killing him. 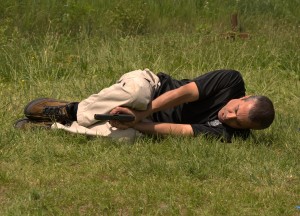 Our second type of engagement is a law enforcement engagement.  Unlike the military, the mandate of law enforcement, when a threat is perceived, is not to neutralize it by killing it, but rather to apprehend and bring to justice.  As in the first type of encounter, law enforcement does not have a choice – it is their job to apprehend the threat.  The approaches may vary, leaving discretion as to where and how to effect this.  While normally it is not advisable to break contact with the threat, in some cases a tactically sound decision might be to break contact while maintaining surveillance, and apprehend under conditions which are more favorable to the law enforcement unit or where a lower level of threat will be present to the public.  IF in the course of the apprehension the subject is killed will be a matter to be investigated as to the acceptable levels of use of force by the department.

The type of engagement which we are concerned with is a civilian engagement, and I will go more into detail.  Regardless of the legalese of any statue governing use of force in the defense of one’s self (and this is more critical in Castle Doctrine states where individuals may feel that the law is “on their side”), we must be able to articulate a defense for our use of force.  To do this, there are three components which must be addressed – the triangle of Ability, Opportunity, and Intent.  If we can prove that the assailant or perpetrator had the ability, the opportunity, and the intent to inflict severe bodily harm or death, then one’s deployment of deadly force will be justified.  These three factors do not relate only to the assailant, but also to the person deploying force in self defense. 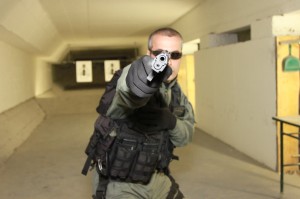 Unlike the military and law enforcement engagements, as a civilian we have one objective – survival.  Anytime you use force in self defense, you are going to have a level of legal liability, so the best course of action is always to flee.  We do not carry a firearm for ego, and we do not engage to make a point.  I do not care how skilled one thinks he may be – anytime an engagement takes place the outcome is unknown, and you may be on the losing side of the confrontation.  Your best course of action is always to flee – and this is regardless of whether the use of force would have been with a firearm or empty handed.

I will present a hypothetical scenario.  You wake up in the middle of the night to the sound of something shattering in your kitchen.  There are various courses of action you could take.

Option 1:  You take your handgun and go down to the area where you heard the noise to engage the perceived threat.  As you arrive to the kitchen, you see an unknown silhouette, and “fearing for your life”, you fire a shot into the threat and take it down.  Did the suspect have the Ability to inflict bodily harm?  It would depend.  Let’s take a scenario where you encountered a large male.  After he was already on the ground, you see he is significantly stronger than you, and next to his body you see a crowbar which he used to break into your house.  In this case, he would have the ability, since he had both the physical potential as well as the means to do so.  Did he have the Opportunity?  At this point, absolutely not – until you closed the distance to engage him, he was outside a reactionary gap which would give him the opportunity.  Did he have the Intent?  Well, from the data we have at this point, his only intent was to steal something from you – no overt threats were made.  Unless the subject were to act in a threatening manner upon seeing you, if you were to shoot it might very well be deemed unjustified and you could be criminally liable.  But now, let’s make it even more interesting. After you take the shot and approach the subject you see that you just shot your son’s friend, who unbeknownst to you, came back from a party slightly inebriated and stumbled while trying to get some water.  Now, we go into the social and psychological effects in the aftermath of the shooting.  You just took the life of an innocent person, and more so of someone close to you.  Do you think you will be able to live with yourself in this aftermath?  What about the ramifications in your social circles? Life will indeed be very complicated for you post-conflict. 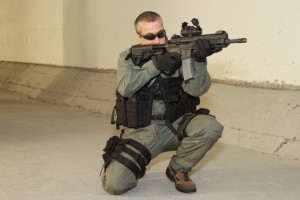 Option 2: You take your handgun and carefully go down in an attempt to escape.  In the process of doing so, the suspect sees you and threatens you.  The suspect is totally drunk and unable to walk straight.  He has one of your kitchen knives.   You are 5 feet from the door, and he is 30 feet from you.  Do you engage him?  First of all, by taking the course of action of fleeing, you have already shown that you had no intent at using any level of force.  Now we analyze the subject based on our three criteria.  Did he have theAbility?  Well, that would be questionable.  He did have a weapon which he brandished, and may be able to close in on the distance fast enough, but until he begins to do so it is marginal at best.  Does he have the Intent?  Absolutely – he has made an overt threat and is brandishing a weapon.  Does he have the Opportunity?  In this case, it is very much like his ability – if he starts closing the gap faster than you can escape, then yes.  Otherwise, no.  Use of deadly force in this case would depend on the posture that the suspect took when he saw you were fleeing.  Any attempt to approach you would indicate that burglary was not his sole intent.

Option 3:  The layout of your house is such that you cannot safely escape avoiding detection.  You dial 911 and call the police.  You inform them of your exact location inside the house, of the threat that is inside your house, and also inform them that you are armed.  You keep the line open, and shout to whoever is downstairs that you are armed and any attempt to come upstairs will be construed as a deadly threat resulting in the use of deadly force.  You take a tactically sound position upstairs such that if the threat comes up to engage you, you will have the advantage.  By following these steps you have given yourself the maximum of coverage you could potentially have.  You have called law enforcement for them to take care of the assailant, you have issued a warning, which is now recorded, as to your willingness to use deadly force only in the event he comes up, and you have taken a tactically advantageous position.  The suspect starts coming up the stairs, in total darkness.  You see an object in his hand.  He has been warned about not coming upstairs.  You are already in a defensive mindset.  He is closing that gap, and he has been warned, so therefore he has the ability and opportunity, and since he has the object in his hand, intent to do harm.  Do you take the shot?  Rule #1 – you do not fire until you have identified your target.  The “suspect” coming up was your son, coming from college for the weekend, unannounced.   The object in his hand is his Ipod, through which he is listening to music and was unable to hear your warnings. 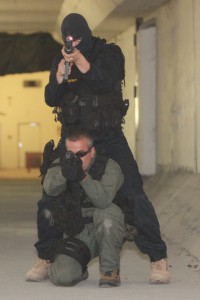 Perception and reality, especially while under stress, are very different.  But having a plan ahead of time, following it, and following basic safety an tactical rules will minimize the chance of you having to use deadly force.  It is always preferable to have the threat come to you, and not the other way around.  You do not know what the threat is comprised of – by taking a tactically sound posture you minimize the chance of being on the losing side of the engagement.  You will not be taken by surprise.   But even if you have taken all of the correct steps as in our Option 3, never fire until you have identified your target.  A few months ago, a famous South African runner shot his girlfriend.  She was in the bathroom, he claimed he woke up to sounds in the bathroom and thought someone had broken into his house.  He fired his gun through the closed door killing her.  I would hate to be his lawyer.  I cannot know if it was murder or not – that is up to the courts to decide – but he is absolutely guilty of homicide, having fired without identifying his target.